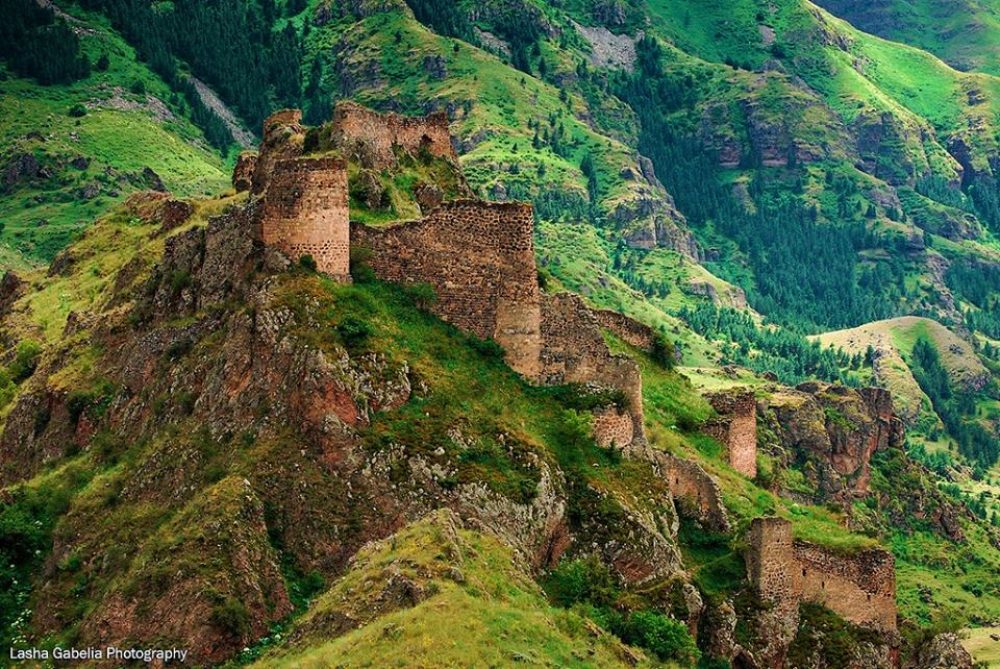 Tmogvi is a ruined fortress in the southern Georgian region of Samtskhe-Javakheti, on the left bank of the Kura River, a few kilometers downstream of the cave city of Vardzia.The name "Tmogvi" is derived from Georgiann word mogvi (მოგვი), meaning "pagan priest" or "magus". The fortress is first mentioned in sources from the 9th century.It was built as a defensive work controlling the ancient trade route between the Javakheti plateau and the gorge of Kura, over a gorge formed by the Kura River. It was a crucial military stronghold in the region of Javakheti. The feudal lords of the region were at that time the Bagratids, the Georgian branch.
Tmogvi gained importance after the neighboring town and fortress of Tsunda was ruined around 900 AD. By the beginning of the 11th century, the fortress had passed under the direct control of the unified Kingdom of Georgia.
In 1073, it was given in apanage to the nobleman Niania Kuabulisdze; his descendants kept it in the following centuries, before it passed to other major feudal families such as the Toreli, the Mkhargrzeli, the Shalikashvili or the Jaqeli. In 1088, the castle collapsed in an earthquake. The medieval Georgian writer Sargis Tmogveli was from Tmogvi. The Ottoman Empire gained control of the fortress in 1578. In 1829, the Treaty of Adrianople transferred the fortress, among with the surrounding region, to the Russian Empire.